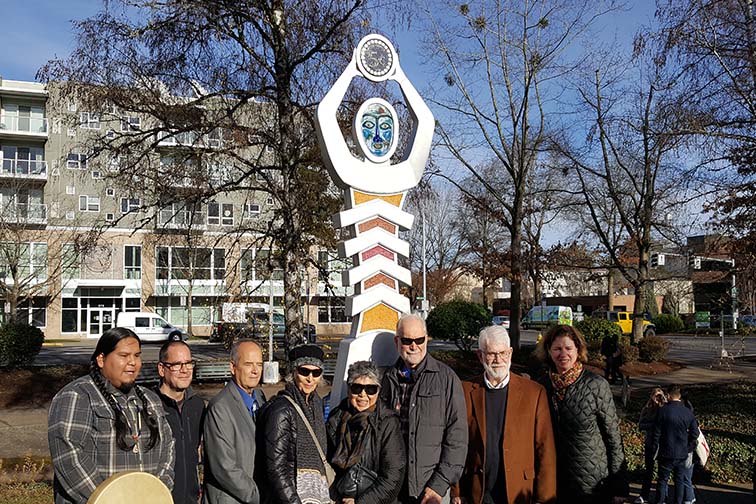 About the “Good Cents” Commemorative Sculpture

The Oregon Bottle Bill, implemented in 1971, is the first of its kind in the nation. It incentivizes recycling by requiring a deposit on a range of bottles purchased. The bill remains, after all these years, an iconic example of Oregon’s commitment to environmental stewardship.

The Good Cents sculpture was commissioned by the Oregon Environmental Council and was created as a collaborative effort among three artists: acclaimed Native American artist Lillian Pitt, Mikkel Hilde, and Saralyn Hilde.

“Most Native American people feel as if they’re stewards of the earth. I myself was taught about my ancestors and our commitment to the earth from the time that I was a small child. We hope that when people see the sculpture, they will think about the issues we face, and we hope that people can develop a greater understanding between the need to protect our environment and our survival.”

Good Cents, located in a park near the intersection of Church and Trade streets in downtown Salem, Oregon, is the second of four public art installations in the Oregon Environmental Council’s “Art of Loving Oregon” series, which celebrates Oregon’s legacy of environmental protection.

Lillian Pitt is one of the most noted Native American artists in the Pacific Northwest. Click here to learn more about Lillian Pitt.