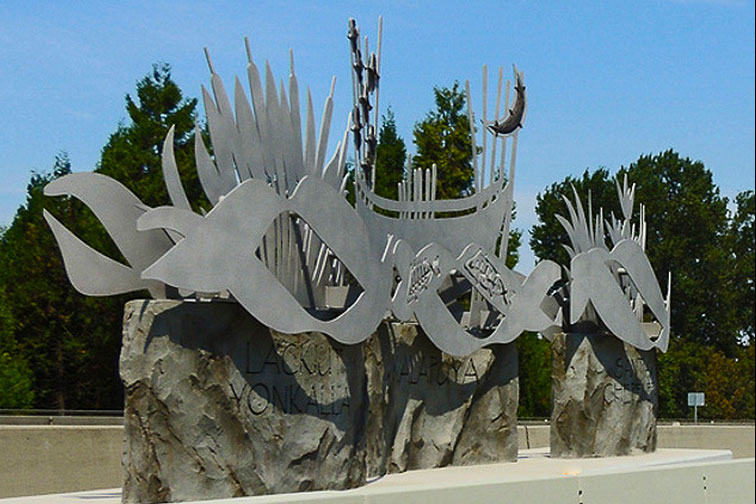 The Kalapuya Bridge public art monument is a tribute to the Kalapuya people who settled the region long before the pioneers came. The monument, a stainless steel and concrete installation, is 44′ long, 19′ tall and 4′ wide. It’s located on a median on Interstate 5 between Springfield and Eugene, Oregon.

The Oregon Department of Transportation (ODOT) commissioned the project.

I wanted to honor the Kalapuya people, the first settlers in what is now known as the Willamette Valley in Oregon.

The installation is based on a coyote legend that was once well known to the Kalapuya people. It recalls a Native legend and reflects elements of the natural environment, tools, and foods that were common to the Kalapuya people in that particular area. It includes salmon, cattails, camus plants, a canoe, a moon and a 4-cornered star.

I hope that when people see the monument, that they will remember the Kalapuya people.

Lillian Pitt has completed numerous public art projects throughout Oregon and Washington. All of her projects give tribute to Native American people who were the first settlers in these regions, prior to the pioneers.