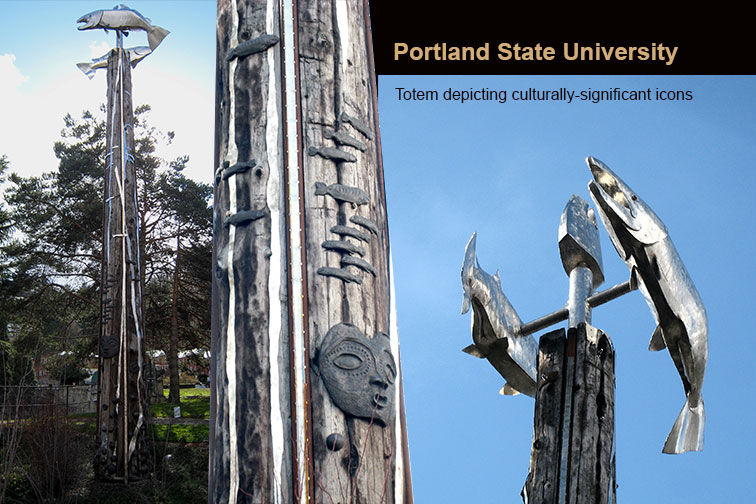 Lillian Pitt’s public art for Portland State University (PSU) includes two rooftop sculptures and a 50′ pole which illustrates and celebrates the journey of salmon in the Columbia Gorge from birth to their journey to the sea, and to their pilgrimage home to spawn.

The Native American Student & Community Center at the Portland State University provides students and members of the community with an opportunity to share culturally-relevent information and programs related to Native American, Alaskan Native, and Pacific Islander students.

It took a while to come up with the idea for what we were going to do, but we finally decided to have a giant marker. And then, once that idea came to us, it was like a powerful vision that kept driving us to completion.

The pole itself … a 50-foot pole … is a log from Mt. St. Helens that we found floating in the water. It must have been there since the time of the eruption. We thought that by using it we would not be destroying any living thing, and at the same time, we would be honoring all of the creatures and plant life that once lived on that mountain.

We put giant Salmon at the top of the pole because they were, and still are, so important to the lifeways of so many Native peoples throughout the Pacific Northwest. The salmon are huge … 12 feet long … but they don’t look that big because they’re so high up.

And we put salmon eggs at the bottom of the pole … and a number of other symbols going up the pole important to the Native peoples of this region.

As with many of the large public projects I’ve worked on, I worked in collaboration with several other artists on this project.