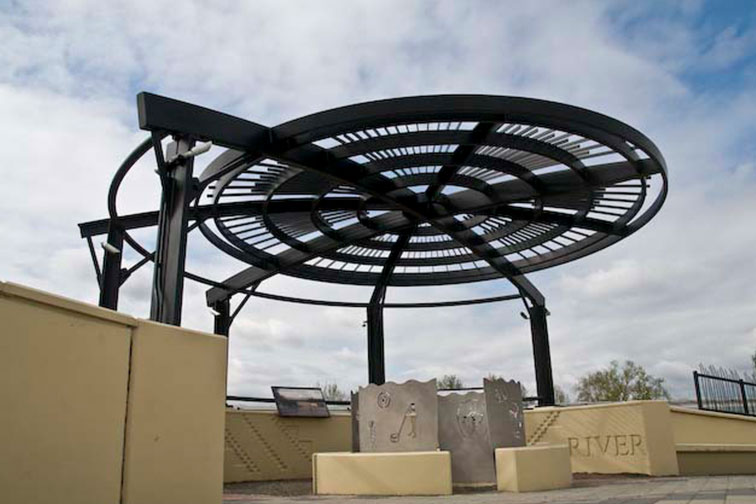 The Confluence Project honors the various Native American peoples who lived, gathered and traded along the Columbia River. It is a multi-site effort spanning a 450-mile stretch along the River.

About the Confluence Project

The plan calls for seven sites in all, with five in Washington and two in Oregon. Each site is positioned near a river or trail intersecting with the Columbia River, each with historical significance to the Native peoples of the region.

The project is the result of unprecedented collaboration among a range of people and organizations. Native American people, governmental agencies, civic groups, and individuals have all been involved. All are connected by their passion for history and culture, and for creating a dialog among disparate groups.

Maya Lin, the famed architect who designed the Vietnam War Memorial in Washington D.C. was charged with the overall design. Various Native American artists from the region were also involved in the design at each site. Lillian Pitt was among them.

The Confluence Site at Vancouver, Washington

The site that Lillian contributed to is located in modern-day Vancouver, Washington. The location is at the confluence of the Columbia River and the Klickitat Trail, an area where Native peoples lived and traded for thousands of years.

The site I worked on was built to honor the Chinookan people, who were awesome traders. They lived and traded from the mouth of the Columbia River in Astoria, all the way upriver to the area where my ancestors lived at Celilo.

This particular area within modern-day Vancouver was a major gathering place for them at the time, as well as a major place for trade.

And because trading was so well established, the Hudson Bay Company decided to put the first European trading post in the Pacific Northwest at that site. So when Lewis and Clark came along years later, they were also welcomed and had a great place to camp.

So there’s a lot of history there, and I really like what Johnpaul Jones says about it: “It completes a circle that’s been broken.”

I created several large works of art at the Vancouver site, and I hope my contribution helps to make a difference.

Other Public Art by Lillian Pitt