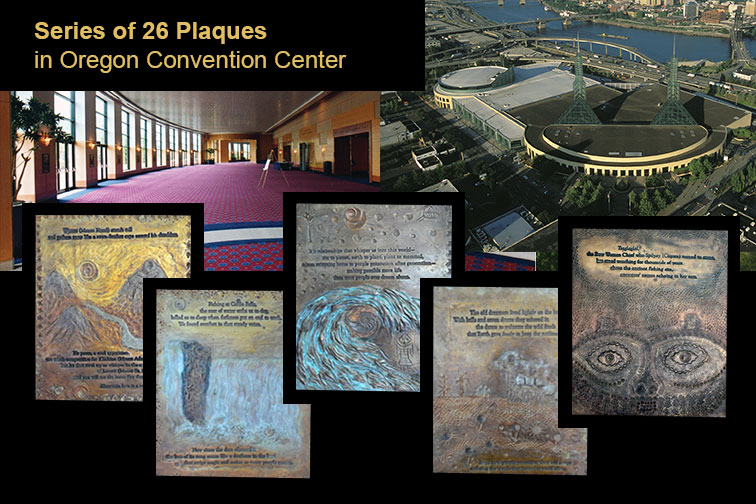 Lillian Pitt’s “Voices” is a series of 26 bronze relief plaques, that are part of the Oregon Convention Center Public Art project. Her work is the largest collection of public art by a Native American artist in any public space within the City of Portland.

The Oregon Convention Center opened in the spring of 1990. Since that time, it has acquired a public art collection is valued at over two million dollars.

For the center’s 2003 expansion, ten artists were selected through a public invitation process to produce work for the center’s permanent collection, one of the largest and most varied convention center art programs in the country.

Lillian Pitt’s “Voices,” a series of 26 bronze relief plaques, is the largest collection of a Native American’s artwork for a public space in the city.

The 26 plaques in the Voices exhibit represent the voices of Native people throughout the region.  While Lillian herself descends from Wasco, Yakama and Warm Springs ancestors, she felt it was her obligation to honor all of the Native peoples of the region in her work.

My goal wasn’t just to produce public art but to educate viewers about the rich cultures and history of the various Native peoples who lived throughout Oregon.

So each of the 26 bronze plaques I developed had both pictures and text. My friend and well-known Native American author Gail Tremblay wrote the text as poetry, and I designed the images. Ken MacIntosh was the fabricator.

We titled the work “Voices” because we thought of the plaques as giving our ancestors a voice … giving them an opportunity to be heard in this modern world where the memory of them are otherwise being drowned by progress.

I wanted to give people an idea of just how diverse we Native people were and still are. So I dedicated plaques to as many people as I could … as well as to as many places, memories, and aspects of culture as I could.

It wasn’t easy. We had only a very short amount of time to complete the project, and we couldn’t have any more than 56 words on a plaque. So basically, we needed to tell the story of 10,000 years of civilization in a series of sound-bites.

Regardless of the stress of getting it all done it time, I was very pleased with the outcome.