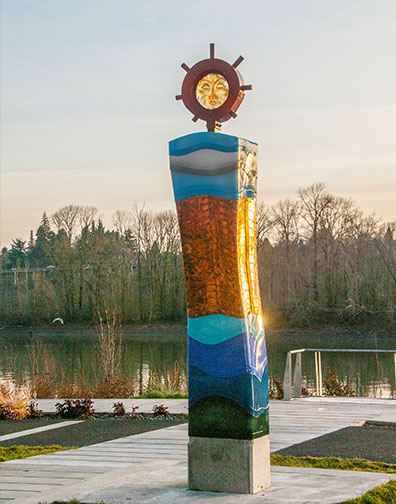 The River Guardian public art installation is located at the South Waterfront in Portland, on the banks of the Willamette River.

River Guardian has two faces. One looks toward the river, the other toward land. The two faces indicate that she watches over the safety of people both on the river and land.

The project was commissioned to commemorate a community development effort along the South Waterfront Greenway Park in Portland, Oregon. The commission resulted from a joint effort between the Portland State University Native American community, and the Portland City Parks.

River Guardian watches over all of the people in the area where she is situated, within the South Waterfront neighborhood of Portland, along the Willamette River.

She is the result of a collaboration between Lillian Pitt and Mikkel Hilde.

River Guardian’s body is made of copper and steel, and her head is made of lead crystal glass. Her headdress is made of steel. She is 9 feet tall.

I have a very strong commitment to helping in any way that I can when it comes to shining a light on the cultures of river people. That’s because my ancestors all lived along the Columbia River, and depended largely on fishing for their livelihood. So I was thrilled to be able to bring River Guardian to the South Waterfront.

Lillian Pitt often works on projects dedicated to helping people learn more about people who made their living on rivers. Two such projects are Confluence in the Classroom and the Fisher’s Memorial. Learn about both of them here…